RT @Spirit_Swap We can't not lift the $SPIRIT s in a brutal market downturn like this. 3 people who RT & Like this tweet will each win $100 in $FTM! Duration: 5 days

RT @SkyspecTech GIVEAWAY ALERT! To celebrate the New Year #skypectech is giving away R2000 to one lucky winner!!! To enter : ☑️FOLLOW us on Twitter @SkyspecTech ☑️LIKE and RETWEET this post For extra entries & T&Cs, check our FB and IG giveaway post @SkyspecTech pic.twitter.com/qbmO4Gj1j3

Did anyone really expect it to be? I mean it’s what we think we want, sure…

END_OF_DOCUMENT_TOKEN_TO_BE_REPLACED

So, the Windows 10 Creators Update. It’s out, and for the most part it seems good. There’s a lot of new stuff, my personal favourites being the introduction of Game Mode (for better or worse), and the changes to Windows Update which allow you to pause updates. And Storage Sense is worth a mention (basically a smarter, automated disk cleanup). There are niggles too, of course. Chief among them being the introduction of more “suggestions” (read: ads) in different parts of Windows, and a particularly frustrating problem of frame rate issues in games. 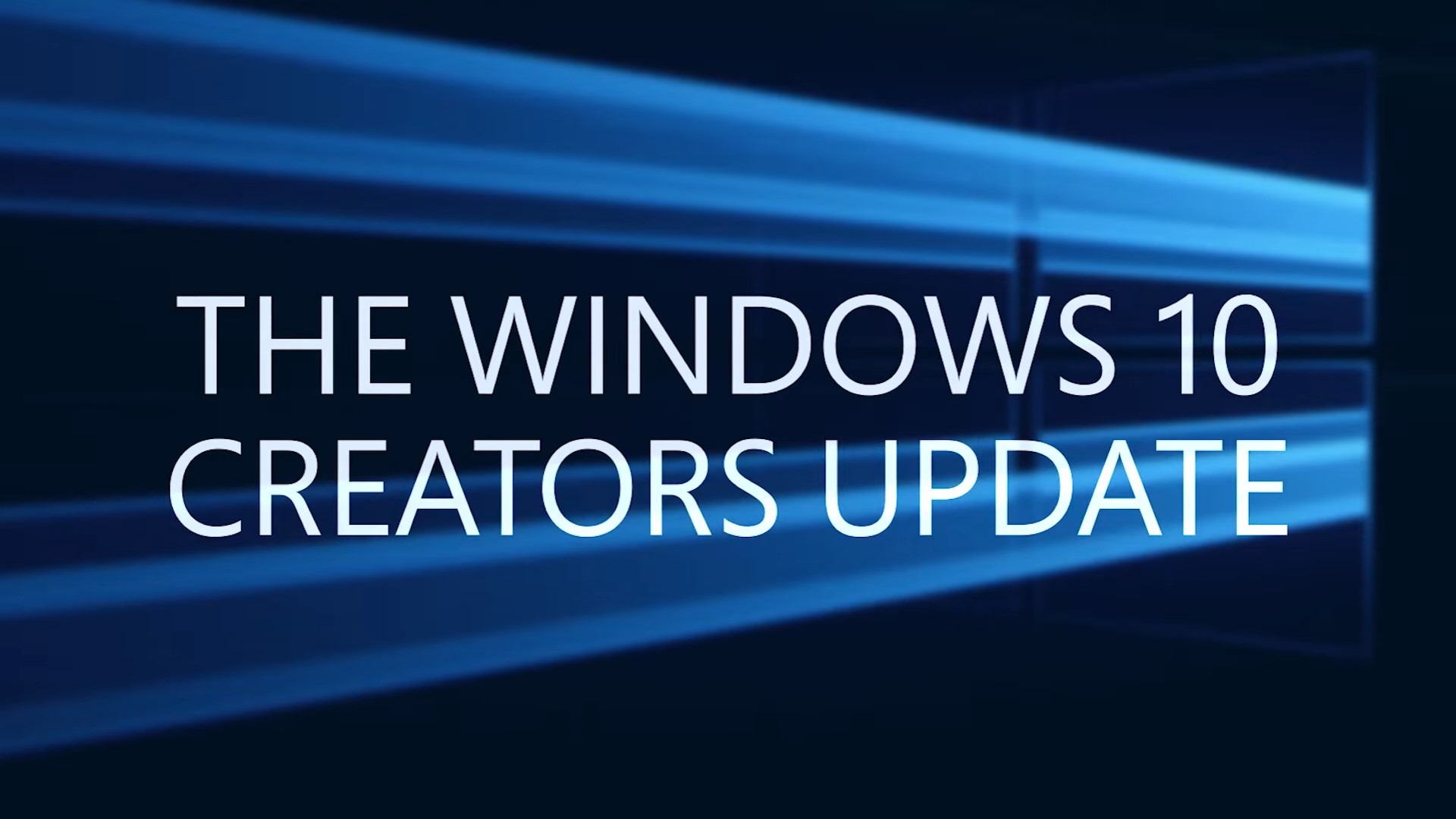 END_OF_DOCUMENT_TOKEN_TO_BE_REPLACED

This Gib is actually gonna be a quickie (like I’ve always meant them to be), because I’ve few waffles to make (read: rubbish to say) – Plants vs. Zombies on Origin is free, On The House! Much like the last time, except not sidelined by BF3. Hooray!

I’ve yet to actually play my free copy of PvZ since getting it last time and my only experience with the title is from a pirated version of old. It was good fun then, though I found it wore thin for me sooner than it did for others.

And, referring to the “Special” part of the title, Origin’s also having themselves a Great Games Sale! “Get up to 75% off select titles” the page says. I scrolled through the selection, averting my eyes to avoid temptation, and there are some nice deals going. I may well get Dragon Age: Origins – Awakening to complement the free Dragon Age: Origins I got some time back and round out my Dragon Age experience (when I finally get to it…).

Wah-hey, it’s a another year. I almost skipped this post, because laziness or some such thing, but eventually my urge to type about the newest free thing on Origin won out and now here we are. So to get right to the pointy end, Origin’s latest On the House thing is ye olde Bullfrog classic Theme Hospital. To get it, you need to do the usual On the House thing of logging in to the Origin application/client, check out the Store, and click all over those helpful bits that, currently at least, are trying to tell you about what this very post is also telling you about (that is, Theme Hospital being free, obviously). Which is a terrible way of saying “open the Origin client and follow the prompts.” No idea how long this’ll last, Origin only gives us a cryptic “Available for a Limited Time Only” message, and I’ve no idea what’s up with the capitalisation… 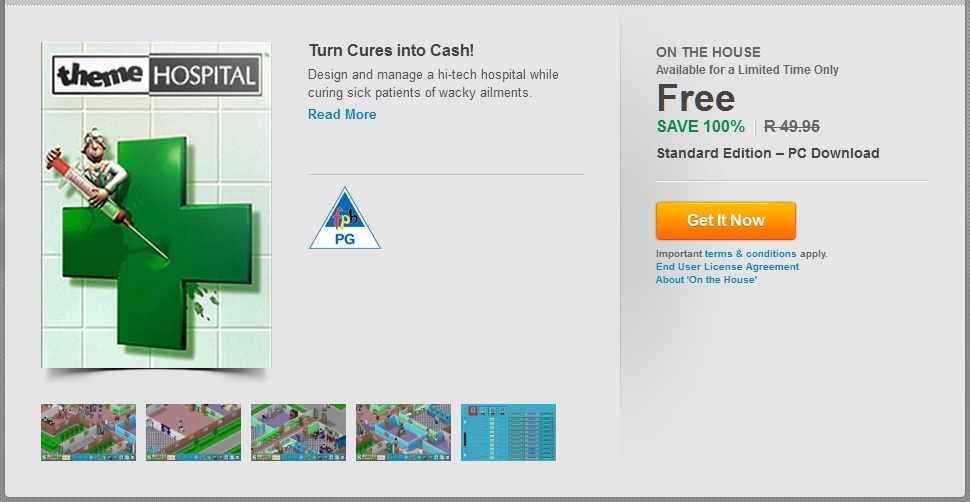 END_OF_DOCUMENT_TOKEN_TO_BE_REPLACED

What? Okay, I seem to have run out of ways to headline things that are getting the On The House treatment on Origin. Ignoring my failure in headline composition, EA has dropped SimCity 2000 Special Edition in the freebie-bin. I’m starting to feel like they decide to drop these things every time I neglect this blog, because I’d be compelled to post about their new promotion… Which is nice of them, I guess. Thanks EA. 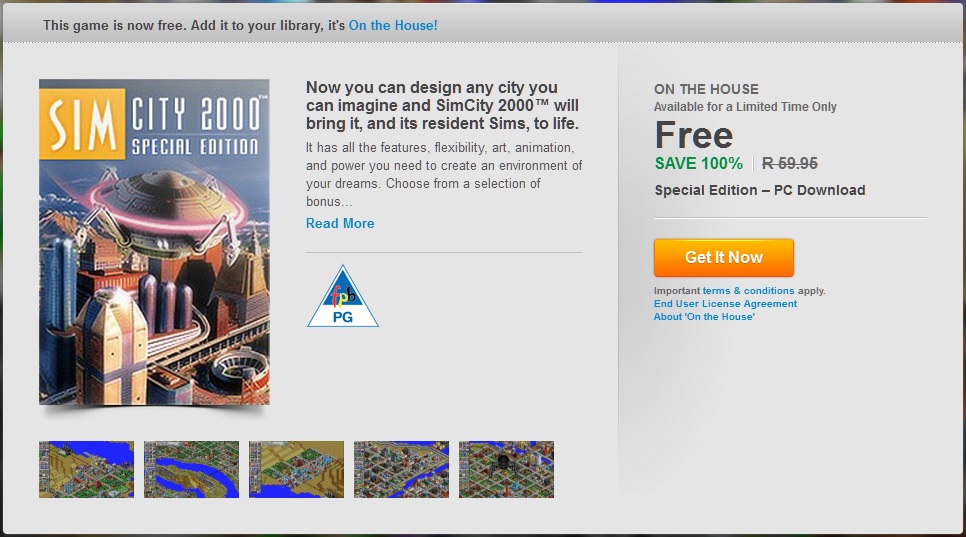 END_OF_DOCUMENT_TOKEN_TO_BE_REPLACED

The apostrophe in that header is probably grammatically incorrect… Oh well. In case my failing English has you flummoxed, allow me to reiterate: you can get Mount & Blade for free on GOG.com until November 14, 13:59 GMT! Go(g)!

END_OF_DOCUMENT_TOKEN_TO_BE_REPLACED

If it’s the 10th of September 2014, one might notice a spinning banner whirligig up on the top right of the page. Why’d I go an stick that up there, you ask? Engaging some Internet activist hippy type keyboard warrior thing, am I? Well, to answer the latter question, not entirely because that’s the rather unobtrusive banner option. As for the former, I like the idea of unbiased treatment of packet data and I’ll try to explain why after the jump.

END_OF_DOCUMENT_TOKEN_TO_BE_REPLACED

Ugh. EA and Origin keep being nice, which is really screwing with that whole “EA is teh devil-company” idea for me… In this latest incident of doing something cool, Wing Commander 3: Heart of the Tiger is free on Origin until 16 September 2014, as part of their On the House thingy. So, y’know, go git a game for nuthin’.

Redeem it on their site or through the Origin application, the choice is yours. Just do it, because it’s free and everyone knows gamers can’t resist freebies. 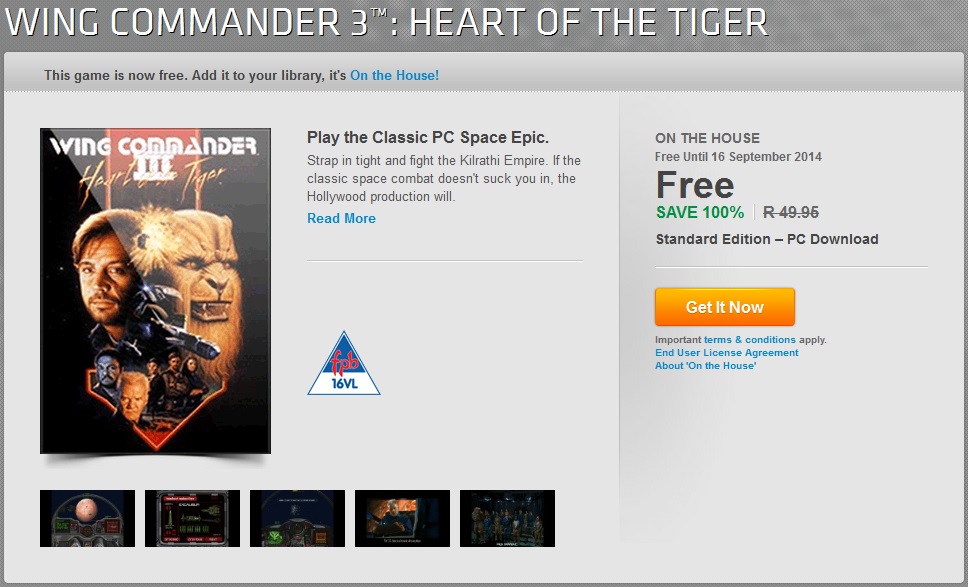 Hmm, perhaps I shoulda wrote the opening sentences with an “EA hopes to cash in on Star Citizen’s popularity” sorta spin, that’d feed the devil-company idea…

END_OF_DOCUMENT_TOKEN_TO_BE_REPLACED

GamersGate, some online store I haven’t used before but likely will today, is having themselves a great big Summer Sale Reloaded and a whole lotta Ubisoft games have been well discounted for the next 61 hours. So, y’know, heads up ‘n stuff.

Myself, I’m looking to pick up Splinter Cell Blacklist Deluxe Edition (75% off), Tom Clancy’s End War (75% off), the AC III Season Pass (75% off), AC IV Black Flag (33% off), and/or AC Freedom Cry (33% off). There are a lot more available, too. Thus far my experience with the site has been pretty positive and I rather like the profile achievements and minion thing they have going on. I’ve yet to buy anything but I’ll update here once I have.

Thanks, Tek Syndicate (go ahead and use their link whatsit so they get commission and such, because they’re cool and I haven’t figured out how to get my own one ^^).

The sequel to 2013’s rebooted Tomb Raider, Rise of the Tomb Raider, was revealed at E3. Gamescom brought forth more information, in the form of (timed) platform exclusivity. 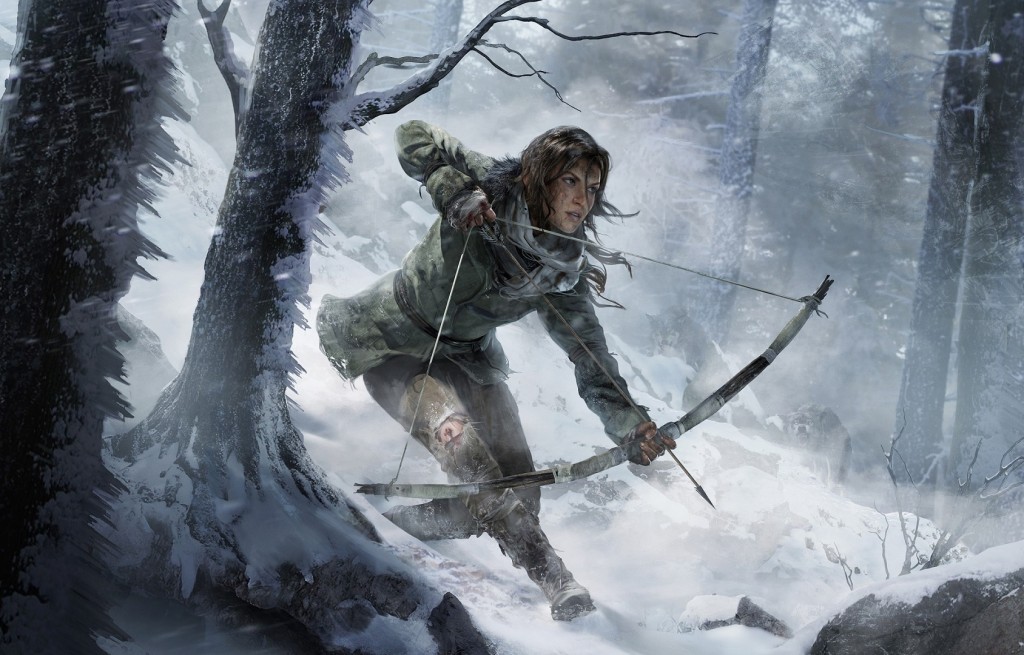